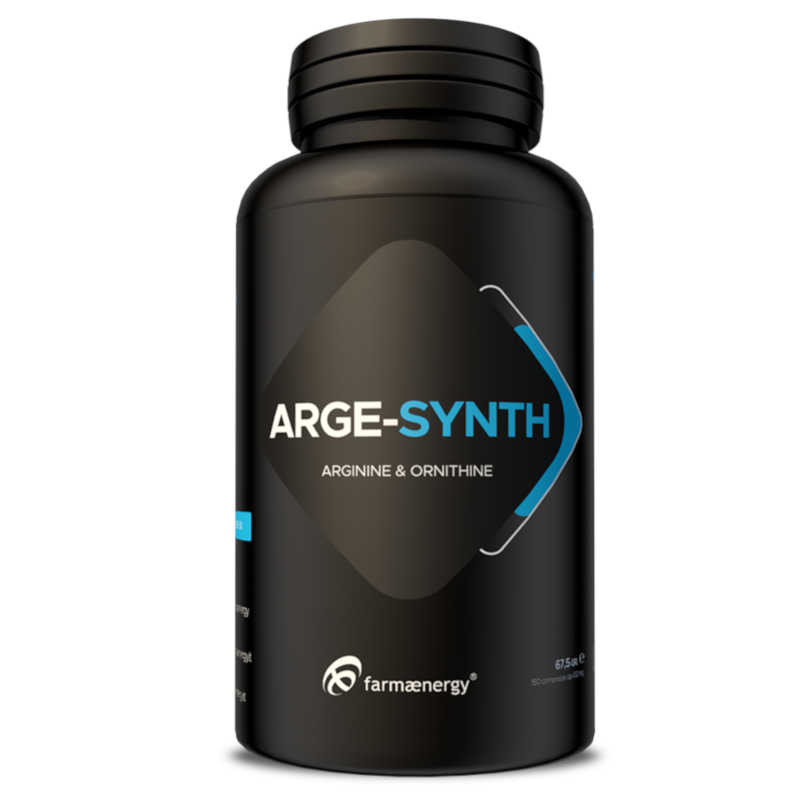 ARGE Synth Arginine & Ornithine Farmaenergy is a supplement made of pharmaceutical pure Arginine and Ornithine with the addition of vitamin B6.

ARGE Synth Arginine & Ornithine Farmaenergy is a supplement made of pharmaceutical pure Arginine and Ornithine with the addition of vitamin B6. It is useful in all cases of increased dietary need or low calories intake.

Several studies have analyze the consumption of these amino acids with the pituitary secretion of the growth hormone concluding that the intake of these elements stimulates protein synthesis and supports the fat deposit burning. Particularly indicated in low-calories diet, recovery and asthenia periods for its tonic and immunostimulating properties, the use of this plastic substrate can also be useful in terms of muscle definition in bodybuilding.

Now let's see which ingredients make up this supplement and how it can help in terms of well-being and physical performance:

The correlation between this mechanism and the sport performance is explained by the catalyzing of ATP and protein synthesis which promote the ergogenic effect and the hypertrophic thrust. It should be remembered that this ingredient can be also exploited as a natural precursor of GH, an anabolic and lipolytic hormone that is able to mediate the fat degradation and to increase the lean tissue, making the new proteins synthesis much more efficient.

The combined consumption of these two elements represents a recent innovation in the field of athlete's food supplementation. This synergy promote in fact the optimization of the somatotropin hormone physiological synthesis, with consequent positive results in terms of:

We also remember you that the post-workout intake of this plastic substrate can perform a direct action on the post training metabolic recovery due to the detoxifying power that these two molecules have in respect of nitrogenous groups oroduced by the AMP (adenosine-mono-phosphate) catabolism.

ARGE SYNTH: CONDITIONS OF USE

Farmaenergy recommends taking 4 capsules a day with plenty of water on an empty stomach before going to bed.

17 other products in the same category: