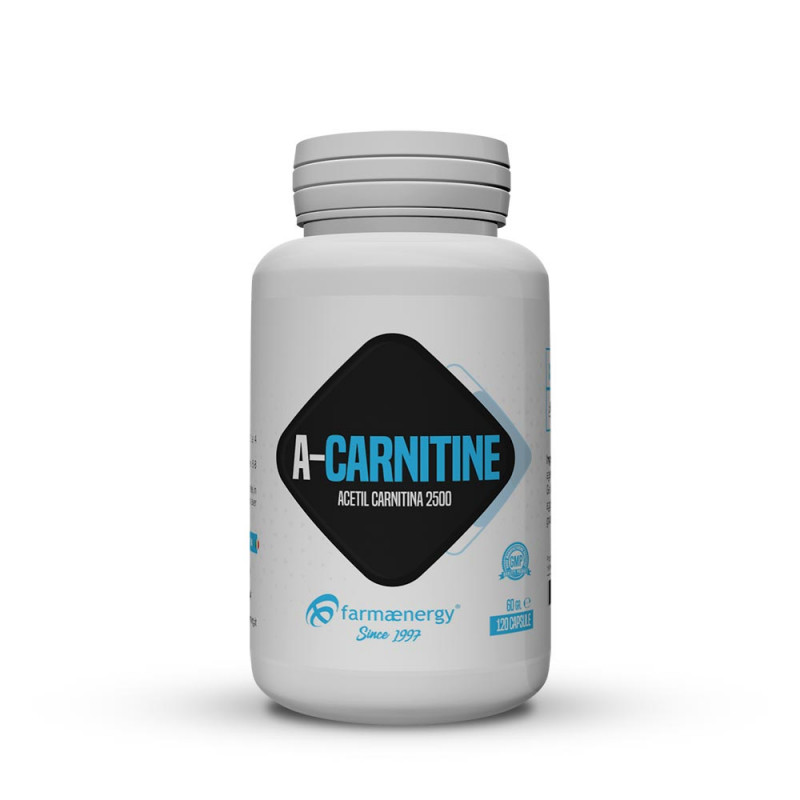 A-Carnitine 120 capsules of 440mg by Farmaenergy is an acetylated carnitine supplement that has slightly different characteristics from l-carnitine tartrate and is one of the most used supplement among athletes.

A-Carnitine 120 capsules of 440mg by Farmaenergy is an acetylated carnitine supplement that has slightly different characteristics from l-carnitine tartrate and is one of the most used supplement among athletes. Its use is suitable for adults sportsmen and is considered a physiological carrier of long-chain fatty acids.

Let's start by stating that all kinds of this amino acid have antioxidant properties. These peculiarities allow the protection of nerve cells from oxidative damage. However, carnitine acetylate does not hold only these abilities because it can produce some others substances that influence the proper functioning of the memory.

In fact, because of the relationship between acetyl carnitine and brain, this compound can be a valuable help in situations where the brain is subjected to a big stress; its consumption is important for raising energy supplies to the brain cells.

Poor acetyl carnitine levels can promote the onset of serious health problems and even death. Deficiencies of this compound can occur between vegans and vegetarians as the result of the non-consumption of some foods (and especially meat) that contain an adequate amounts of this important nutrient.

A-CARNITINE: WHY AN ACETYL CARNITINE SUPPLEMENT IS SO IMPORTANT?

Acetyl Carnitine supplements are beneficial for the treatment of specific clinical conditions and the general well-being. The intake of this substance results in a cognitive and brain function improvement.

Specifically, patients who have suffered a stroke can gain multiple benefits and improve their health through the use of concentrated carnitine supplements. At the same time, thanks to the effects on the brain, it can also be a method of prevention from mental diseases such as Alzheimer's.

Regarding weight loss and hormonal stimulation, the characteristics of the ALC are a bit different. Studies on male guinea pigs has shown that the administration of acetyl-l-carnitine from four to eight months, decreases by 7,7% the diameter of fat cells under the skin, compared to the increase of 8,6% of those that are not taking ALC. If we turn this evidence on man, it's as if a 24-year-old subject remained thin as when he was 12, with a 16% reduction in fat deposits.

From this we can deduce a ACL greater efficacy than normal carnitine in terms of increased oxidation of fats and other substrates at 260% mitochondrial level, while the use of the traditional form does not exert any effect.

Further studies showed that acetyl-l-carnitine produces a 25% increase in mitochondrial energy unlike the null result of l-carnitine tartrate. It is therefore understood that ALC can use a greater quantity of fat than the more commercial l-carnitine, even if physical activity converts it into carnitine acetylate.

Farmaenergy recommends taking 2-3 capsules a day, at breakfast or 30-40 minutes before training. Do not exceed the recommended dose.