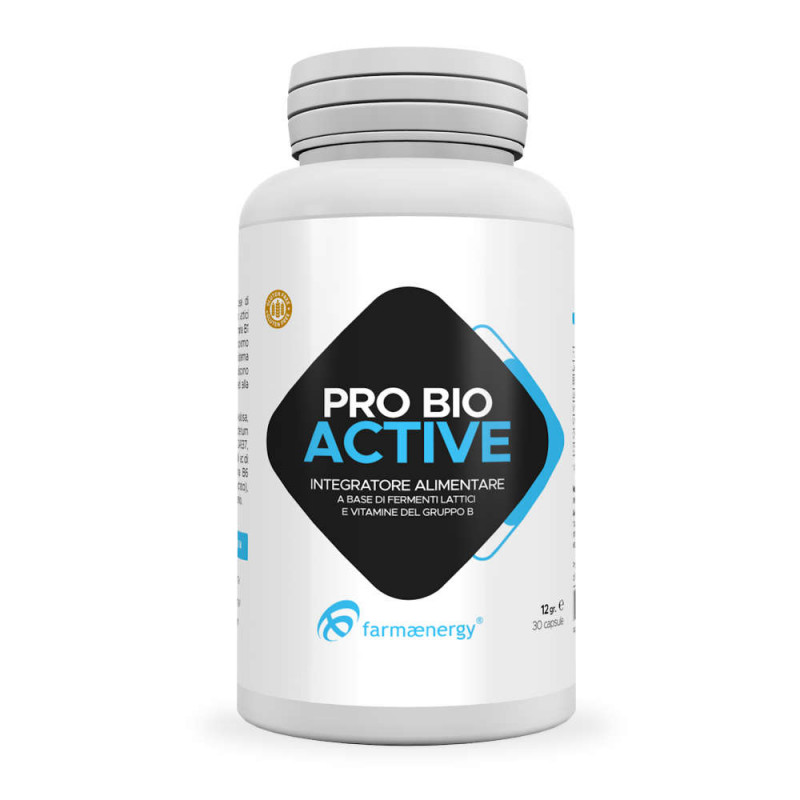 Pro Bio Active 30 tablets from the line NaturAll by company Farmaenergy is a dietary supplement based on milk enzymes and B-vitamins; it helps balancing intestinal flora and regulating energy metabolism, treating asthenia and reducing fatigue.

Many studies on the properties of milk enzymes in stimulating and reinforcing the immune system have been carried out. Even if no definitive studies prove these benefits, much research has shown positive aspects in this respect.

A study on seven different strains of probiotics has been carried out by Peaineau D. et al., who have observed their immune-stimulating effect. Eighty-three healthy volunteers aged between 18 and 62 have been divided into two groups. One group has been using milk enzymes, whereas the other group has been using a placebo. All the subjects have been given an oral vaccine on the seventh and fourteenth day. This experiment aimed to observe if their body would have a reaction by producing immunoglobulins, which are antibodies. This factor would prove the activation of the immune system.

The analysis of saliva has not shown any changes among the groups of volunteers, whereas marked increases of immunoglobulins G have been highlighted  in blood serum in subjects that were given strains of probiotics, namely strains of Bifidobacterium lactis and Lactobacillus acidophilus.

In sum, after oral vaccination, these probiotics have shown the property of triggering the immune response by determining a quicker synthesis of antibodies in our bodies. Let us remember that immunoglobulins G (IgG) constitute 75% of an adult's antibodies and play a very significant role in the immune response.

When one talks of symbiotic supplements, one's reference is made to a blend of probiotics and prebiotics whose effect on the intestinal microflora is positive, since they promote its health. Some of the best symbiotic supplements contain a blend of Lactobacillus and Bifidobacteria that can regulate metabolism, strengthen the immune system and modulate the inflammatory response.

A symbiotic product differs from a simple prebiotic or probiotic dietary supplement because it contains non-digestible ingredients for men, which act as nutriments for “good bacteria” in the lumen of the intestine, thanks to which they can proliferate and ensure a rebalancing of intestinal flora.

Moreover, they prove very useful in the case of lactose intolerance (this problem could not be solved by the only use of prebiotics) or following dysbiosis due to diarrhoea and use of antibiotics; they prove very useful also in reducing intestinal inflammation, which is often encouraged by a poor diet, stress or environmental pollution.

PRO BIO ACTIVE: PROBIOTICS AND PREBIOTICS WITH ADDITION OF B-VITAMINS

We shall now describe in detail the main properties of each component of this nutraceutical supplement.

ottimo per i gonfiori intestinali