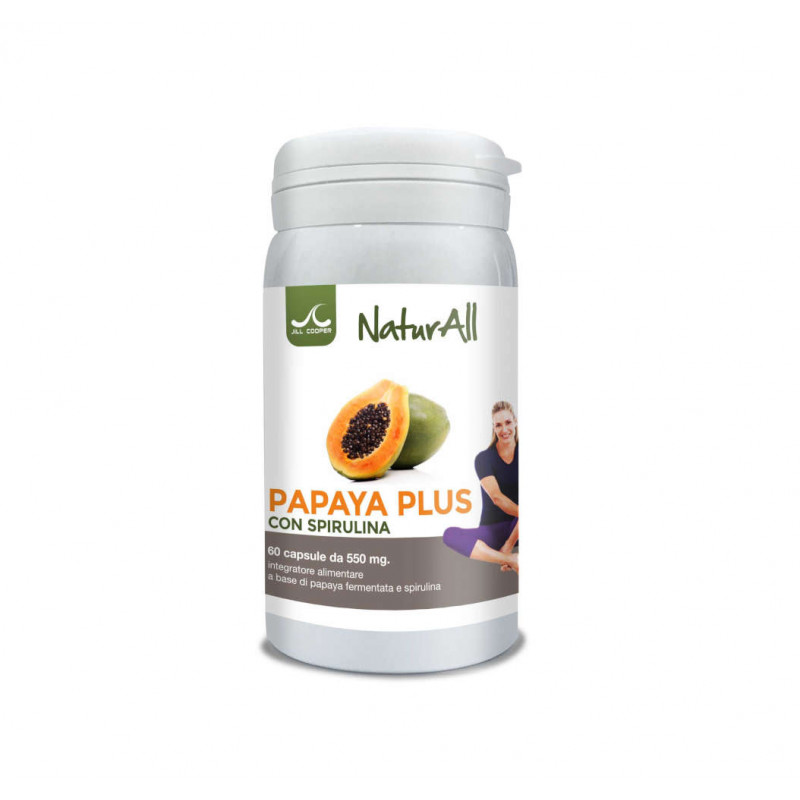 Papaya Fermentata NaturAll is a dietary supplement based on papaya that is indicated for contrasting oxidative stress that is responsible for the premature ageing of tissues.

Papaya Fermentata NaturAll is a dietary supplement based on papaya that is indicated for contrasting oxidative stress that is responsible for the premature ageing of tissues. If one looks for a 100% natural product that can carry out a marked antioxidant effect, this proposal from company Farmaenergy is right up one's alley. This dietary supplement is useful in asthenia and it is intended for problems of concentration and it is used to help body dealing with stress situations. FERMENTED PAPAYA: FEATURES OF THE FRUIT Luc Montagnier, the virologist who won the Nobel Prize in Physiology or Medicine in 2008, thanks to his discovery of immunodeficiency virus (HIV), which is actually a retrovirus, has drawn the attention of the official medicine to the use of papaya in the pharmacological treatment of that disease. Plant in the Caricaceae family from Mexico and Central America, it seems to carry out a potent inhibitory effect on the overproduction of free radicals. They are small but very reactive molecules that bond with compounds such as DNA, proteins and lipids and that denature their functions to let potential serious illness including neoplastic diseases occur in the long term. The fruit has significant quantities of water, vitamin E, vitamin C, vitamin A, B-vitamins, many flavonoids and papain. The latter is a specific proteolytic enzyme, that is an enzyme facilitating protein digestion. Among its properties, therefore, papain carries out a digestive action, which is possible also because it is basically an alkalinizing agent, which would be very important for those suffering from digestive disorders caused by the lack of some enzymes in the body and a reduced production of hydrochloric acid in the stomach. Another characteristic that makes it desirable to eat papaya is its immunomodulatory effect thanks to which the fruit can re-establish the balance between acid and base, since pathogenic bacteria in the intestine supposedly proliferate in acidic environment, therefore if the sign of the pH level of the soil were reversed (i.e., if it were turned into basic) they would die and, consequently, the immune system, including the bacterial flora, would strengthen. Let us remember that stress and a sedentary lifestyle, as well as, and above all, a nutrient-poor diet helps to increase body acidity and, consequently, to weaken the immune response from the body to the pathogenic agents. FEATURES Fruit with an antioxidant action anti-ageing supplement that can neutralize free radicals; with papain, that is a proteolytic enzyme carrying out a digestive action; it boosts the natural defenses of the body; immunomodulatory effect; it helps re-establishing the balance between acid and base in the body. PAPAYA FERMENTATA NATURALL: CONDITIONS OF USE Company Farmaenergy recommends to take 2 capsules a day with plenty of water. Do not exceed the recommended dose.